Matthew Wolff never was one to go to bed early, and on Saturday night at the 3M Open in July, he was awake even later than usual. Sitting in a threeway tie for the 54-hole lead at a PGA Tour event does not induce sleep in a restless 20-year-old making his third start as a pro. He was busy contemplating what his loopy, powerful swing might produce. “A two-year tour exemption,” he says. “Invites to majors. And the $1.15 million first prize. I admit, the possibility of the job security made me nervous.”

Solace came when his phone lit up with a text from Donnie Darr, Wolff’s assistant coach at Oklahoma State, for whom he’d delivered the individual title at the NCAA Championship as a sophomore just two months earlier. “Get after it tomorrow and just do what you do,” typed Darr, who is an important part of Wolff’s inner circle. “Remember, you’ve won more in the last six months than any of the guys you’re playing against.”

Soothed, Wolff promptly fell asleep. The next day he provided some of the best theater of the year. His wild-looking swing delighting the CBS commentators; he pured it around the course, hitting 15 greens in regulation (ball-striking is his strength); and arrived at the 18th hole a shot behind Bryson DeChambeau. Wolff rammed home a 26-foot putt for eagle to beat DeChambeau and rookie Collin Morikawa by one. That night, still amped up, Wolff rode for six hours in a LandJet bus down to the John Deere Classic in Illinois, not sleeping at all, and played in the Monday pro-am. His year, with all the college golf events and the eight tour tourneys, has been intense. 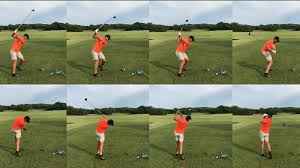 Wolff, chatting with us over a Champ Burger and fries at PGA National Resort & Spa (“I wish he’d eat better,” says his mother, Shari), referenced Darr’s text a couple of times. If there’s a signature, it’s the way Wolff has steered by guiding-light sayings that seep out of him in conversation. Most were impressed on him by his swing coach, George Gankas, or discovered on his own. They reflect his outlook on golf and life. One goes, How your swing looks is irrelevant. It’s what happens with the golf ball that matters. Another is, Accept all outcomes, and never be embarrassed. A third: If you fear a certain kind of miss, your subconscious will take over, and you’ll miss that way anyway. So don’t fear it. A fourth: Be a lone wolf, not a follower. Next: Don’t set goals. Instead, do things with your game that lead to fantastic things. Still another has to do with the eye-rolling knocks on his swing, which he has heard since he was a kid: Listen to the good stuff and shut out the bad. It’s just noise. … Winning is winning regardless of the stage you’re on.

There’s a certain wisdom to the sayings that makes it hard to fathom that Wolff is not yet 21. Tiger Woods won his seventh major, the 2002 Masters, on Wolff’s third birthday. “I got to meet Tiger at Liberty National,” Wolff says. “He was stretched out on the benches in the locker room, and I had to ask him to move so I could get by. He jumped up and welcomed me to the tour and told me how cool it was to meet me. I just stood there, speechless. Obviously I’m still at the stage where I can’t believe I got to meet Tiger Woods.”

Wolff unabashedly loves “The Avengers” movie series, has watched all nine seasons of “The Office” at least eight times and is excited about the recent purchase of a new PlayStation. Worldly things such as the machinations of buying a house are above his pay grade, and Shari is in Florida to help him sort things out.

Wolff’s journey as a pro has just started, but already his life is a cool metaphor for that loopy swing. He grew up in Agoura Hills, Calif., in a family of middle-class means. A terrific athlete from the beginning, he excelled in all sports, and at 12 pitched a few innings for his team at a national tournament in Cooperstown, N.Y. “Matt was better than the rest of us kids at everything,” says Seldon Doyle, 19, one of Wolff’s childhood pals. “Basketball, baseball, soccer, it didn’t matter. He just had this effortless way of doing everything.”

When Wolff tried golf at 5, he instantly was smitten. Other sports remained important, but golf was his biggest love. His swing, formed intuitively, mimicked his baseball swing, his right arm flying from his side and the club held vertically like an umbrella at the top. When Wolff went with his older brother, Eli, to golf summer camp at nearby Lindero Country Club—they didn’t swim or play tennis—Wolff was so good, the instructors there didn’t push him to change, but other instructors did as he got older. “Matt is a sensitive kid, and people telling him his swing could be better definitely bothered him,” Shari says. “But he filled up a shelf in our home with trophies quickly. The latest trophy didn’t stay up front for long—they’d be pushed back to make room for the new ones.” 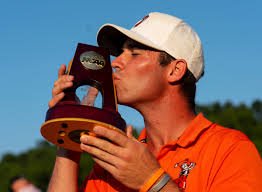 The Wolff family could not afford a private club, and travel to junior tournaments and access in general was difficult. “Matt played all over, wherever he could get an invite,” Shari says. “People were so nice to us. Other parents loved having Matt around to play with their kids, and he had a way of politely bugging adults to visit their courses. It was the same when he needed clubs. He had a knack for admiring a club he wanted in front of the owners. It had a way of finding its way into his bag.”

Wolff’s traits extended into competition. “At a tournament in Ventura when I was 12 and he was 13, I had a six-shot lead after the first day,” says Doyle, today a sophomore at Fresno State. “Matt started the round birdie, birdie, eagle, birdie, birdie—he’s six under after five—and just like that, we’re tied. The whole time, he’s talking up what we’re going to do when I go to sleep at his house that weekend. He shot 64 with bogeys on two of the last three holes. He almost made me feel good losing to him.”

At 14, Wolff ventured over to Westlake Golf Course, the teaching base of Gankas, who had a phenomenal group of junior golfers. After introducing himself, Wolff hit some drivers. “I thought it was the sickest swing I’d ever seen—I loved it,” Gankas says. “I promised his dad I wouldn’t turn him upside down, and although we’ve refined a lot of things, he’s essentially the same. By high school, he was even more dominant.”

Shari says Gankas has had greater influence on Matt than any other person. “He’s more than a big brother to Matt, more like a father. He’s a big kid himself, and he nurtures Matt in a sweet way. George knows that Matt responds only to positive reinforcement, but I’ve seen him be firm with him, too. Those two love each other.”

RELATED: Capturing Matthew Wolff’s genius is harder than it looks

Wolff’s college experience at Oklahoma State lasted only two years, but his record was astonishing. In 2018, he earned the Phil Mickelson Award as the nation’s top freshman, holing the putt that gave the Cowboys the team title. The next season, he won six of the 12 events he entered and won the Jack Nicklaus and Fred Haskins awards as national player of the year. “One thing that built up my confidence was winning a tournament at Olympia Fields near Chicago,” he says. “I’d never played a major-championship course before, and I always wondered if they were the big, bad monsters they’re painted out to be. I shot six under there over 54 holes. Conditions weren’t like the 2003 U.S. Open, I’m sure, but the layout was the same, and it told me that no course would be too hard for me.”

His first pro event, at TPC Scottsdale in January while still an amateur, provided another epiphany. “On the range early in the week, I was comparing my ball flight to the guys around me. Kind of a rookie thing to do, but I couldn’t help it. What I saw was my ball was flying as well as theirs were. Suddenly I got this big rush. I thought, I definitely can do this. I’ve felt that way ever since.”

By the time we finished our Champ Burgers, Wolff had said “thank you” to our server no less than six times. Three of them, he called her by name. When the bill came, I asked what he thought of the 20-percent tip.

“You’re good, but I usually leave a little more nowadays,” Wolff said. “Did you notice how hard she was working? She filled our iced tea glasses like three times.” I scribbled out the 20 and wrote in 30 percent. Wolff winked. “See what a nice guy you are?” he said.