Jeffersonville is an 18-hole, par 70 public course, owned and operated by West Norriton Township, a suburb of Philadelphia. Opened in 1931, Jeffersonville Golf Club was designed by legendary architect Donald J. Ross. In 2002, the course was restored and modernized by Ron Pritchard, a locally based architect who specializes in restoring the works of this design master.

Few enough people have regular access to a Donald Ross course as members of a private club. Even fewer still are fortunate enough to live near a course of his that is open to the public and relatively inexpensive ($62 and below) to play. Thanks to stewardship by both the town and renovation/restoration specialist Ron Prichard, Jeffersonville Golf Club is one of the best municipal courses in the northeast. It’s a great example of how well Ross’ design philosophy holds up today for the golfing masses. Fairways are relatively wide, ball-eating hazards are few (but important when they do appear) and greens are approachable but reward good decision-making. Holes like 3 (drivable par 4), 13 (majestic down-then-up two-shotter) and 15 (long par 3 with the steepest green on the course) are a test for anyone and help make Jeffersonville a course anyone would be happy to have around the corner.

Designed by Donald J. Ross, a Scotsman who is perhaps the most revered of all golf course architects.

Best known for such masterpieces as Seminole in Florida and Pinehurst No. 2, the U.S. Open venue in North Carolina, Ross is credited with between 350-400 courses over his long, prolific career, including several local gems such as Aronimink GC, Torresdale-Frankford CC, Chester Valley CC, Gulph Mills CC and Riverton CC.  No one ever truly looked into whether Ross truly designed Jeffersonville until 2000.

It was then that township old-timer named Bob Deemer wrote a letter to Rick Troncelliti, then West Norriton Township president.  Deemer had seen all the publicity over Ross when Pinehurst No. 2 hosted the 1999 Open, won by the late Payne Stewart, and we wondered why the township didn’t promote Jeffersonville as also being designed by Ross.

In his letter, Deemer said he knew fact that Jeffersonville was a Ross course because he had lived in a house adjacent to the course and he could remember a sign on the property: “Jeffersonville Golf Club, A Pay As You Play Facility, Designed by Donald Ross.” 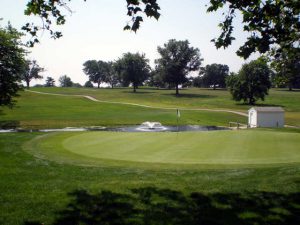